This test stand was designed for post-overhaul testing of the 2.0 mW gearbox. It determines vibration and acoustical characteristics as well as verifying that the output speed and load requirements are within specifications. The unit under test (UUT) is connected to an identical gearbox that runs in reverse and simulates the wind turbine torque. The test stand is driven and loaded by four GE traction motors and controlled by a LabView® Data System.

Prior to shipment and installation atop a wind turbine tower, the gearbox's performance must be verified. This requires gearbox testing at full power and speed. Operation at specific speed/torque test points provides accurate data on vibration, noise, lube oil temperature and gear mesh geometry. 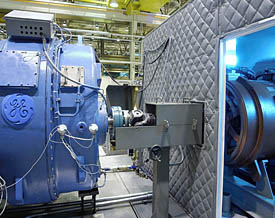 The most critical technical issue for the gearbox test stand was the problem of simulating the 578,000 lb-ft, 18 rpm input of the wind turbine. The wind turbine gearbox is one of the few devices available with this duty rating. Therefore, using another, identical gearbox (operating in reverse) proved to be an ideal source of this speed/torque combination.

The data acquisition system consisted of a Nation Instruments FieldPoint system coupled with a Brejer & Kiel sound and vibration system. Both of these systems included custom software that allows a high level interface to the operator.

In this arrangement, the gear box is loaded by a motor and the electrical energy produced by the load motor is used to power the initial drive motor. Thus, the test is conducted at full load but the net power consumption is only about 15% of the full load. The electric drive system of P-205 might well be able to use such a regenerative approach to save energy.

Emprise was the prime contractor and designed, built and commissioned the $2 million project. 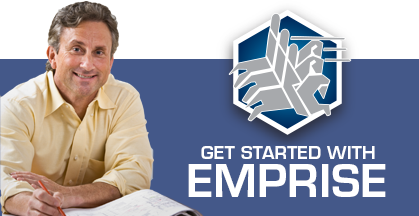 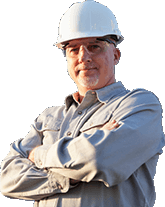